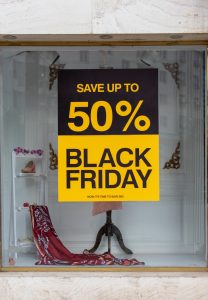 Most households this year likely came home to a similar scene after the annual shopping event of the holiday season. There was stack of boxes neatly piled and waiting beside the door when we arrived home Tuesday afternoon. Each one contained deeply discounted merchandise bought online during the Black Friday and Cyber Monday deals. Each purchase also contributed to the record breaking sales set this year.

While these two shopping days have always seen a spike in sales, this year’s spending eclipsed all previous years. What caused this uptick in numbers? And how much more revenue is now generated through online sales? These are both interesting questions that are being closely watched by both retailers and analysts alike.

Traditionally, the day after Thanksgiving is a high holiday for those who love shopping. Since the birth of the internet, Cyber Monday has also been added to this list. People who love a good bargain would line up for hours or even camp out the night before the store opened. They would do all of this just to snag the best deals on their holiday purchases. However, 2020 has been a year of many changes. While most headlines report one depressing story after the next, retailers are celebrating record setting sales from online shopping.

This year’s spending far exceeded all previous Black Friday sales. Americans spent $9 billion, which is up 21.6% from last year according to data from Adobe Analytics. Analysts calculated that online shoppers in the U.S. spent $6.3 million per minute. That equates to about $27.50 per person. If you do the math on all your own purchases, you might be surprised how conservative this number is in comparison.

One of the most important numbers to look at though is where purchases are being made. Roughly $3.6 billion came through purchases on smart phones or mobile devices. This figure rose 25.3% from the year before. Overall, these purchases accounted for 40% of all sales this year.

Following Black Friday, Cyber Money superseded even these numbers. This shopping day broke the record as the largest internet shopping day ever in the U.S. American shoppers spent a shocking $10.8 billion on things like smart phones, electronics, and toys. Cyber Monday spending rose 15.1% from last year.

These spending habits and record numbers make more sense when you look at the current conditions in the U.S. Most of us are spending more time at home in general due to social distancing measures. Whether it is because you work remotely or simply because fewer places are open, it means you are likely spending more time online.

Calculating total sales this year will be a bit more difficult due to the extended sales throughout the holiday season. So far, Americans have spent $106.5 billion. However, Adobe Analytics estimates this figure to reach more than $180 billion in online sales this year. So, the nagging question is who are the biggest winners from Black Friday and Cyber Monday in 2020?

Amazon is continuing to see huge gains in the fourth quarter. According to an analyst from Truist Securities, Amazon earns 42 cents on every dollar spent equating to billions of dollars in profits. Other companies like Costco, Etsy, and Target each hit all-time trading highs on Black Friday. Many stores have spread out their promotions for longer period to capitalize on the trend of current online shopping as well.

Even though many large retailers closed on Thanksgiving to prevent large crowds, some hot ticket items were still hard to come by. For example, the Xbox One X and PlayStation 5 consoles sold out early and likely won’t be available until next quarter. Even online people were kept waiting to buy Lego’s. It seems like limited hours and heavy online traffic cannot keep seasoned shoppers from their prize.

Online studies show people are spending more time at home during the pandemic. This is a golden opportunity for online retailers to boost their profits. Many larger retailers have been advertising deals since October to draw more online traffic. Since most people are avoiding public places, they must depend upon online sales to compensate. According to the numbers, many retailers surpassed their expected profit margins.

Another factor that added to the success of Black Friday and Cyber Monday was ease of accessibility. Now that people are able to shop online, they can avoid the crowded malls and stores which everyone dreads. Many stores also offered curbside pick-up to ensure shoppers’ safety. Not only was there less hassle, but also prevented in-store conflicts that have incited violence in the past.

Furthermore, most retailers have extended their timeframe so people can take advantage of holiday deals. This strategy has been especially effective with special savings only available online. Many retailers kicked off the holiday savings to coincide with Amazon Prime Day as well. With the bombardment of discounts and advertising, it is hard to resist the urge to impulse to buy.

Increased advertising and targeted marketing made it even more likely that you participated in Black Friday and Cyber Monday this year. However, this does not bode well for your monthly budget. I always get slightly nervous and more conscious of my finances before the holidays. The pressures to host friends and family and find the perfect gifts are not kind to your credit cards.

As someone with a history of credit card debt, you can easily understand my hesitancy to buy anything during Black Friday and Cyber Monday. To resist the urge, I removed all the shopping apps and avoided my smart phone as much as possible. This year, I planned ahead and made a list. I intend to stick to it instead of splurging on things I don’t need just because they are on sale. This mindset helped me stay within my budget and prevent overspending during the Black Friday and Cyber Monday deals. However, if you are someone who continues to struggle with debt, contact a debt relief counselor to help you get back on track in the new year.