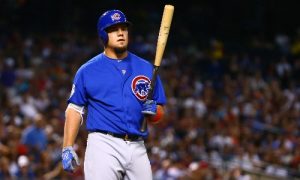 If you are a Chicago Cubs fan, and even if you are not, then you know that last season the Cubs broke a 108-year curse to become World Series Champs. It took the Cubs 7 games to knock off the Cleveland Indians, and the final game came down to extra innings. One of the biggest players in game 7 for the Cubs was their DH, Kyle Schwarber. Kyle went 3 for 5 in the game, but more importantly hit .412 during the postseason for the Cubs.

So, since Schwarber is so famous, you may be wondering, what is Kyle Schwarber’s net worth?

At 24 years of Age, Schwarber is one of the youngest players on the team’s roster. He was drafted in 2014 as the #4 overall pick out of Indiana University. At the current moment, Kyle Schwarber’s net worth sits at $1.2 million. Although this might see very low for a baseball player from a championship team, he is bound to increase it dramatically in the near future.

In 2014 when Kyle was drafted, he received a signing bonus that was worth $3.125 million. As is the case with most baseball draftees, this high signing bonus is all the money many of them see for quite a while as they are forced to work their way through the minors. Kyle came onto the scenes for the Cubs during the 2015 season. That year he made just over $230k in salary while batting .246 with 16 home runs and 43 RBI’s. The following year, 2016, Kyle was finally a fully active member of the Cubs roster; however, injuries plagued him throughout the year until he was able to return during the postseason. Despite his injury, he still made over half a million dollars during the season. This current season Schwarber is scheduled to make a salary of $565k.

The majority of Kyle Schwarber’s net worth is made up through his current baseball earnings and mostly of his signing bonus from 2014. After this baseball season, Kyle will be able to demand a hefty salary considering his play doesn’t falter. He is a regular starter for the Cubs this season out in left field. He has yet to make any errors thus far, but his hitting isn’t as great as it had been. At the time of this writing, Kyle is hitting less than .200, but he has belted 5 home runs. If he is able to improve his hitting and also lessen his strikeouts, he should have no issue inking a big contract next year.

On a personal note, Kyle is one of four kids. He has three sisters and a father who is a retired police chief. He was born on March 5, 1993 in Middletown, Ohio. He spent his years growing up in Middletown and attended Middletown High School where he played baseball. He then went on to the University of Indiana and was selected by the Cubs in 2014.

Did you like this post? You may also want to check this out:
How to make money with Paribus

One thought on “Kyle Schwarber’s Net Worth”